Previous Next
Respect for your teacher 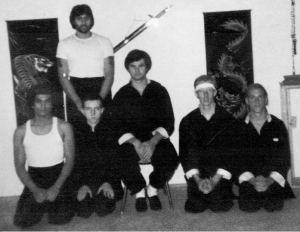 An early class of Master Scrima’s from the late 1970s

More than 20 years ago I conducted an interview for the Wu Gong Journal with Grandmaster Leung Shum. I asked him many questions pertaining to martial arts training and in particular Ying Jow Fanzi (鷹爪翻子) – Eagle Claw Kung Fu

During the interview GM Shum spoke about the relationship between student and teacher in Chinese martial arts and in doing so referred to the saying “Yi Ri Wei Shi, Zhong Shen Wei Fu” (一日为师，终身为父) – “One day as your teacher, like a father for a lifetime.”

A more proper literal translation of the above saying is, “Even if someone is your teacher for only a day, you should regard him like your father for the rest of your life.”

In China this type of respect toward one’s teachers has been part of Chinese culture for thousands of years. For Westerners, these concepts don’t come naturally; they have to be taught.

A teacher transmits knowledge that he or she has acquired from his or her teachers. In martial arts, this knowledge holds special significance because it deals with the art of combat and self-preservation. No real teacher is prepared to instruct a student in the finer points of the art if the teacher does not sense humility and respect in the student.

Respect for others begins with respect for oneself. If one lacks self-respect it becomes difficult to demonstrate respect for others. Like physical skills, respect is an attribute can be learned and the martial arts class is the proving ground for such learning.

As a student learns to overcome difficulties and gain in self-awareness and self-confidence, a sense of accomplishment begins to emerge. This leads to enhanced self-worth, which also nurtures self-respect. Ultimately the student comes to realize that the teacher is the catalyst for these achievements and it is at this point that real respect toward the teacher begins to build.

Ultimately, for students who pursue the arts with seriousness and commitment over an extended period of time, the relationship between student and teacher becomes a lifelong bond.